GanttProject 2.8 "Pilsen" is an evolution of the previous GanttProject 2.7 "Ostrava". It makes working Early Begin constraint in the scheduler and fixes a number of bugs and usability issues.

The major new feature is actually pretty old one which has been made working. We had so called "additional constraint" called early begin in task properties for years, and its meaning was pretty vague, mostly because this constraint didn't work.

As of 2.8 this constraint made working and it has clear semantics: task with early begin constraint set to some date X will be scheduled to start no earlier than X and as close to X as possible, provided that other constraints permit that.

The obvious use of this constraint is to set the earliest date when a task can start. For instance, if task begin date was set on July 5 then changing its earliest start constraint to July 14 will move task to the future.

However, there is another use case which is now possible: you can use it as "planned start date", as opposed to the real start date set by the scheduler. If task had initially start date and earliest start constraint set to July 14, and was moved to some later date because of finish-start dependencies on other tasks then removing the dependencies will move the task back to July 14.

Since Early Begin constraint is now enforced, older projects where it was set and probably forgotten may be affected. When opening older projects GanttProject audits the first run of the scheduler and reports the results to user if at least one task changes its dates after the first run. Scheduler Report looks as follows: 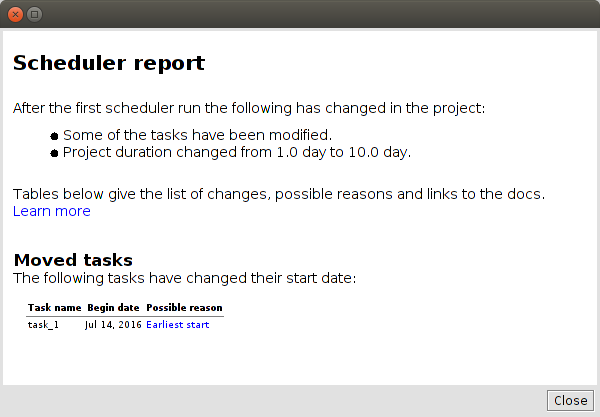 If your project is fine and the scheduler has made no changes, you'll see no report. Otherwise the report shows up a couple of seconds after file has been opened and you need to inspect the changes made by the scheduler.

There is a number of other important bugfixes in GanttProject 2.8. Korean translation has been significantly improved thanks to the efforts of ihavnoth, and other translations have also been updated.

Distribution for Ubuntu and other Debian-based Linux systems which registers MIME type and file associations have changed MIME type from application/ganttproject+xml to application/x-ganttproject. The latter apparently already comes by default with Ubuntu so no reason to use the former anymore.

Maintenance updates fixed most of High-DPI compatibility issues and added a new feature: sorting of tasks by begin/end dates